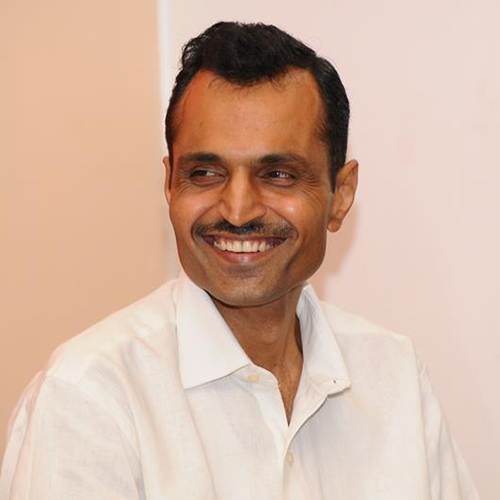 Corporate Sector: 1990 – 1997
Arjun started as Management Trainee with SRF limited, a leading family owned professional business group in India. He was posted in an Industrial relations setting in one of the Group Factories. Later, he took on the role of the Internal HR systems consultant reporting to the Group CEO. He joined NIIT Ltd, a leading computer education and technology organisation, in 1995 as the Head of Management Training in the web based learning business. Here he co-created modules with Phil Crosby on quality among other E- Learning resources and received the company’s award for excellence in the field.

Business Entrepreneurship: 1997 – till date
After 7 years of corporate citizenship, dissatisfied with following other people’s agendas, Arjun decided to begin his own venture. He felt that “Entrepreneurship makes you take complete responsibility for something. In this claiming as against blaming, you learn so much about yourself and the world around you.”

Arjun is the founder of Vyaktitva, an organizational development firm that works with companies, NGOs and individuals to bring out the true element of their character. With Vyaktitva, Arjun has worked on the conceptualization, design and implementation of various HR and Change interventions such as Organization Restructuring, Performance Management, Role and Competency Mapping, 360 degree feedback, assessment centers, Career Planning, Reward and Recognition systems. Leadership Training and organisation development interventions form one of his core areas of expertise. Of late, Vyaktitva has been specializing in accompanying culture transformation projects within large and medium corporate and social sector organisations. They are making significant impact through these whole system change initiatives.

Social Entrepreneurship: 1993 onwards
Arjun is also the co-Founder of Pravah (Since 1993) and ComMutiny – The Youth Collective (Since 2008) and has been key to the design and development of core programs and frameworks in youth development for both National and International youth organisations and networks. He is also part of the founding team of the vartaLeap Coalition, a multisectoral entity incubated by ComMutiny. In all of these organisations Arjun has been core in strategic direction setting and co-creating internal systems to facilitate large scale change with soul at the grassroots level. Some of the best and high impact public initiatives and campaigns designed and run by these orgainsations have had Arjun’s key contribution in design and development.

Arjun has authored 4 books and several articles and learning resources including training handbooks.

Two of his novels ,The Flawed God and End of Story have been published by well-known publisher, Hachette, India.
The first of his non-fiction book co-authored by him on the potential of the ‘5th Space’ as a game changing innovation in youth-centric development, called Ocean in a Drop: Inside-Out Youth Leadership, published by Sage (2013), has been widely read and received critical acclaim in the youth development field. The second book, ComMutiny – Sparking an Inside-out Youth Revolution, published by Konarak (2019) follows up the first by laying out concrete ‘How to’ resources for making 5th spaces happen. Many of his articles have been published in leading
media outfits in India including IDR, Logical Indian, Youth Ki Awaaz and Newspapers and Journals. Some of the handbooks he has been part of producing are Co-Creating Empowering Spaces: A practice-based guide for youth facilitators’ published with the Commonwealth Sect (2014), From Me to We, PrayaSapna – A training Manual forteen clubs of the National Youth Program in India.

Arjun has also used his story telling skills to be part of commissioning and directing over a 100 short films in the field of youth development along with leading film makers in the development sector. Some of these films have received National and International Awards in different categories and are all up on the 5th Space youtube channel

START A PROJECT, SCHEDULE A TALK OR JUST SAY HELLO