Consultant at Vyaktitva, works with people and organisations to bring about change. Characterised by an irreverent sense of humour, she infects everyone with enthusiasm and optimism. When not facilitating or conversing with people, she is busy with a multitude of hobbies.

“Learning experiences are like journeys. The journey starts where the learning is now and ends when the learner is successful. The end of the journey isn’t knowing more, it is Doing More.” – Julie Dirksen 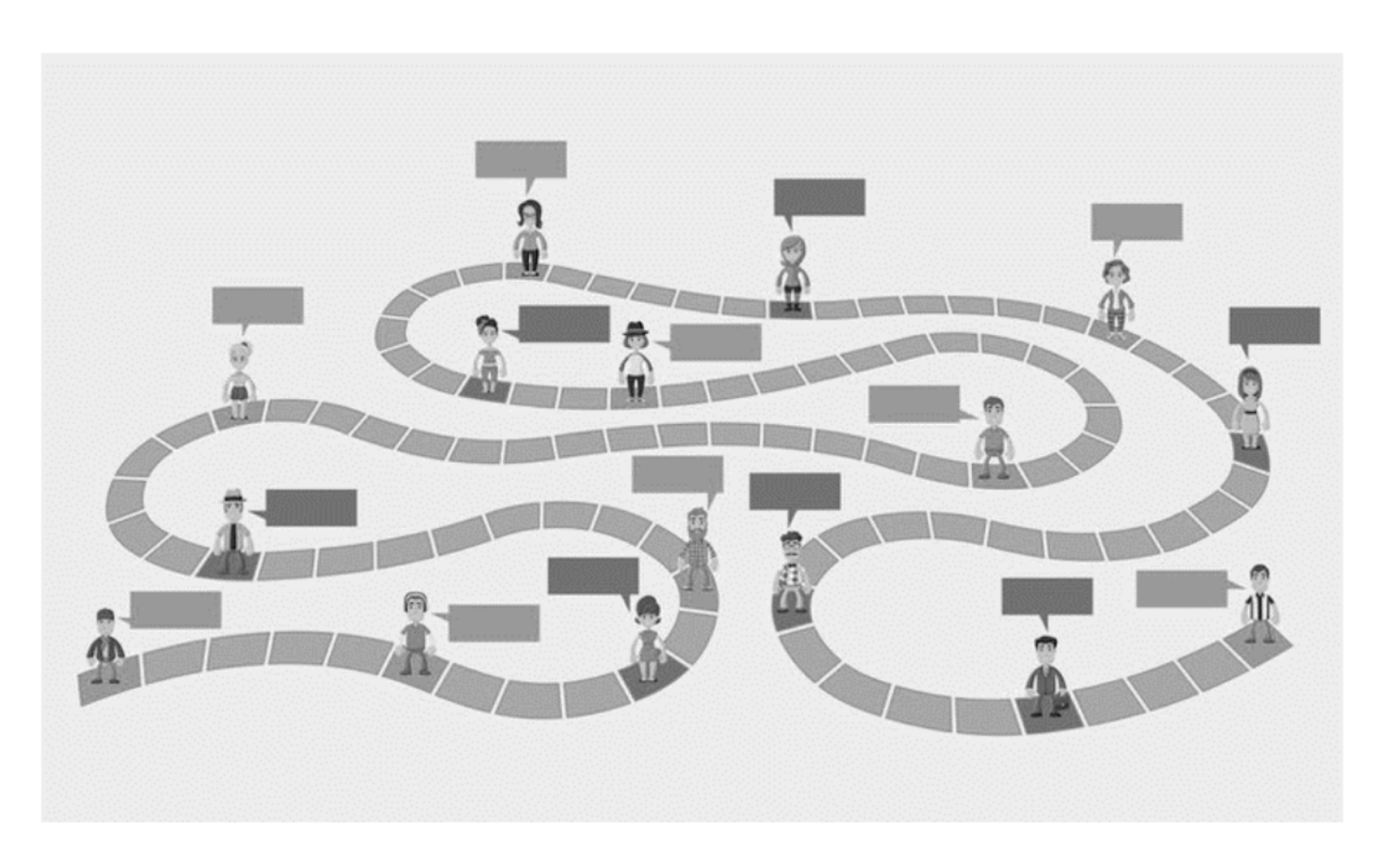 At Vyaktitva, we strive to create an impactful environment of change that can be sustained and modified through the years. We feel that a learning intervention comes through an exploratory journey, not through one-off workshops. We have succeeded in implementing this learning journey concept in tandem with our brave HR and L&D partners.

A leading pharmaceutical company partnered with us, to improve their sales team’s communication skills. The team consisted of professionals, required to interact with sizeable hospitals, doctors and suppliers. Using the ADDIE model, I identified the key learning gaps and designed a journey for maximum sustainable impact. The journey was spread over 3 months divided into two phases of 3-day and 2-day sessions respectively and rolled out to the entire Sales team. The key difference between this and other similar interventions lay in the time gap between the phases. The classroom interventions taught the constructs and had the participants apply the same to their work. The ensuing period involved intense refl-action and feedback.

Refl-action is the process used by each participant to practice the constructs in every applicable sphere of their roles – customer presentation, vendor negotiations, presentations to senior management etc. – and to go through an internal loop after each delivery to deconstruct what they applied and how it fared. This would form the basis for the next delivery and loop back into refl-action. This process helped them practice actively and improve with every delivery.

Alongside refl-action, the process of peer and manager feedback was used to help the learners / practitioners identify their strengths and opportunity areas. The feedback process 3 was continuous and recorded for each of them, which helped them chart their progress.

This was a dramatic shift in methodology where earlier it was about a workshop with practice in the classroom to a continuous application and feedback. The two-pronged approach ensured that the learning was maximized and sustained in a way to seep into their way of communication. This is what the Business Director had to say at the culmination of the journey: =

As a beneficiary of the interventions we sought from Vyaktitva on Communication skills / Executive presence I felt these were the key takeaways for my team:

A global shared services company entrusted us with the development of communication skills for their top talent.

These were people who in the course of their work, hitherto, were pure executioners of processes and as such did not need to interface with anyone other than the people in the company. Over a year or so ago, the India hub became one of the largest global hubs and had to service a large spectrum of internal customers internationally. Overnight, this talent needed to engage with a diverse group of people across the value chain. The lack of communication skills surfaced in:

I partnered with them and proposed an engagement over a six-month journey to maximize learning for sustainable change. 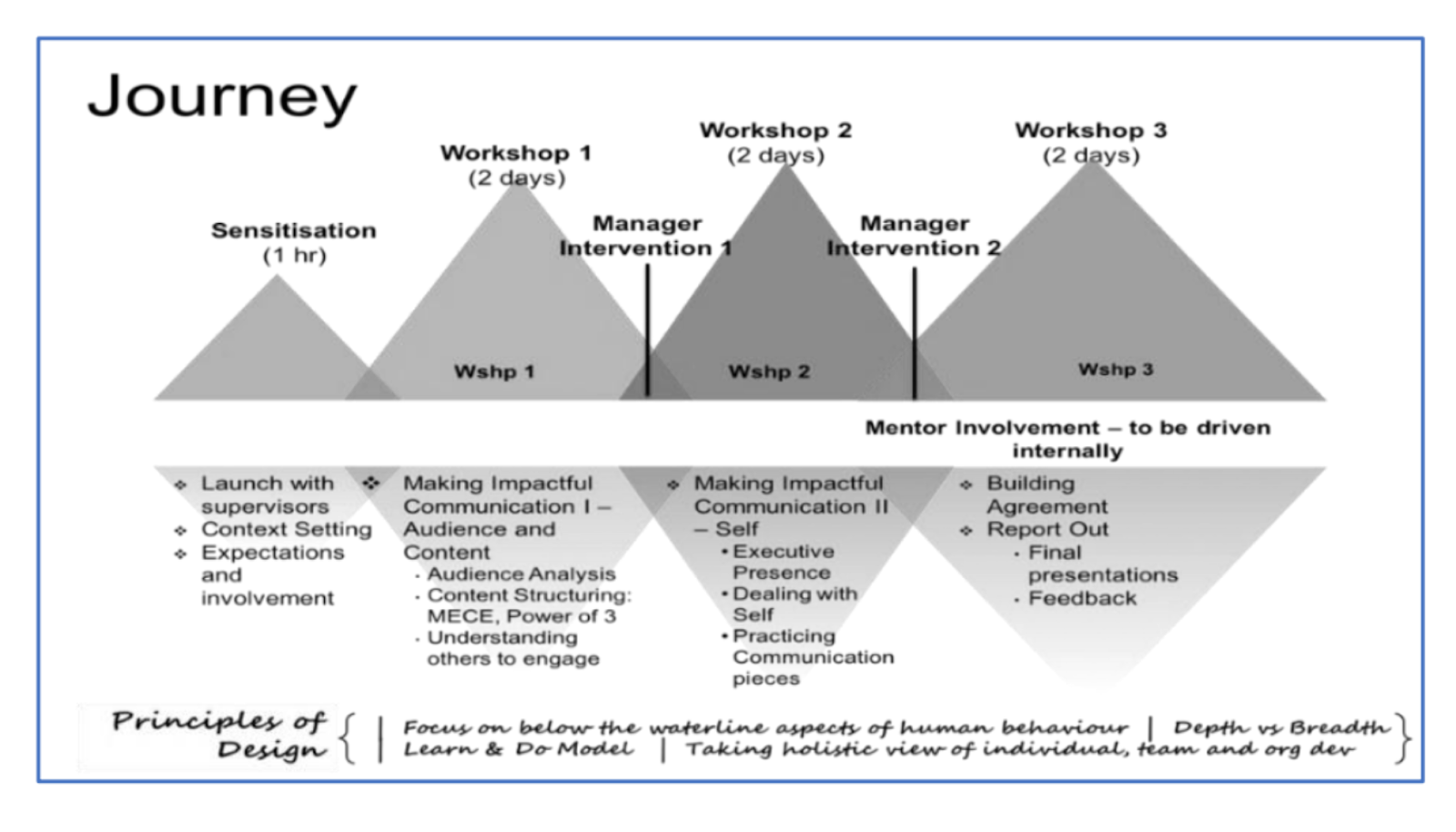 After a detailed analysis, I concluded that the journey envisaged for this group rests not just on learners, but requires the participation and engagement of the leadership team in the development of their people.

This journey too rested on the processes of refl-action and feedback. Therefore, right at the start the journey included a sensitization session with the Division Head along with his leadership team to help them understand their role as Mentors. The mentors were equipped with observation templates which they used real time to give feedback to the learners. These completed templates were fed back to me before the next workshop. I used them to suss out the areas of opportunity for the learners in order to nuance the common patterns in the workshops. Some of the other feedback that the learners received were from their own peer group. Many of the learners, while presenting in a public forum, were not alone and hence the same was utilized to give feedback to each other since the vocabulary was now common between them. The feedback helped them to continuously work on their journey and ensured that the skills were deeply embedded.

Each workshop was centered around construct-learning and applied to actual work. Workshops 2 and 3 started with the learners individually presenting and sharing their journey using the constructs along with feedback from the group.

At the end of the intense journey, the Division Head expressed his satisfaction with the journey in glowing terms. The Mentors’ feedback, on their learners, was one of deep satisfaction. The feedback from the learners was extremely heartening. They expressed high degree of confidence in their communication skills and the ease with which they now practice the same.

In summary, the journey methodology ensured a high level of engagement and ownership from all the stakeholders. The initial contracting with the other stakeholders ensured that they all owned the learning and development of their teams. It also helped them create better relationships with their teams which hitherto was based purely on transactions.